Drift boat king salmon fishing on the Kasilof river today! The morning has been good with a few king salmon caught. Since the kasilof and Kenai river has gone to catch and release with artificial lurers only, the bite has been on par to what “I” think it should be. This fish took us through two holes to land it and the guest said it was the most epic battle he has ever had and has king salmon fished his whole life. He was happy to release it and said he wouldn’t have killed it even if he could. For a great day on The river and a chance to catch a really big king salmon the kasilof river is producing fish right now. 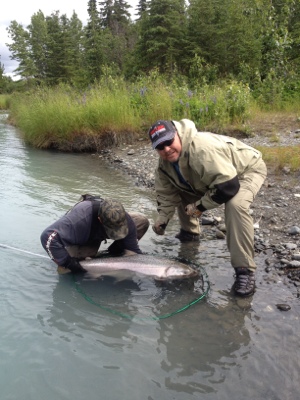 It is hard work fishing for king Salmon and can take some patients too but the reward is well worth it.  The fish will weigh in the high 30 pound range and is fresh in from the ocean.  The best time to catch a king salmon is when it first enters the river.  They are full of energy and will flat out punish you. We offer king salmon trips on the kenai and kasilof rivers and have both drift and power boat options.

If you are interested in chasing a king salmon give us a call at 907-382-6808 or find us on the web at www.driftingonthefly.com