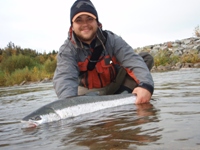 Kenai Peninsula Steelhead Fishing Guide trips will give you a greater chance at success on these hard fighting fish.  We have spent much of our time studying and fishing the local Kenai Peninsula steelhead fishing water.  The 3 main rivers on the Kenai Peninsula that we fish for steelhead are the Kasilof river, the Anchor river, and Deep Creek.  All 3 rivers have great fishing opportunities for sizable steelhead, dolly varden, king salmon and silver salmon. 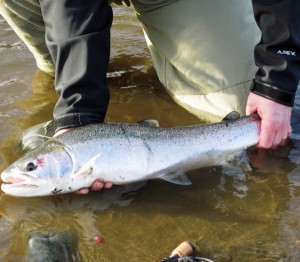 The Anchor river and Deep Creek are also located on the Kenai Peninsula and are walk and wade fishing streams only.  We have explored and fished these rivers for years as well and know them by heart and timing.  Steelhead usually start to show up here in late august but we don’t really start targeting steelhead until the second week in September.  These streams are smaller than the Kasilof river but have produced a lot of fish.  I have seen tides bring in a big push of fish and between a couple of anglers have hooked up on dozens of fish.  Again swinging and nymph fishing will catch fish but egg patterns will dominate.  These fish like resident rainbow trout key in on the salmon spawn and can’t resist the right size and color combination!